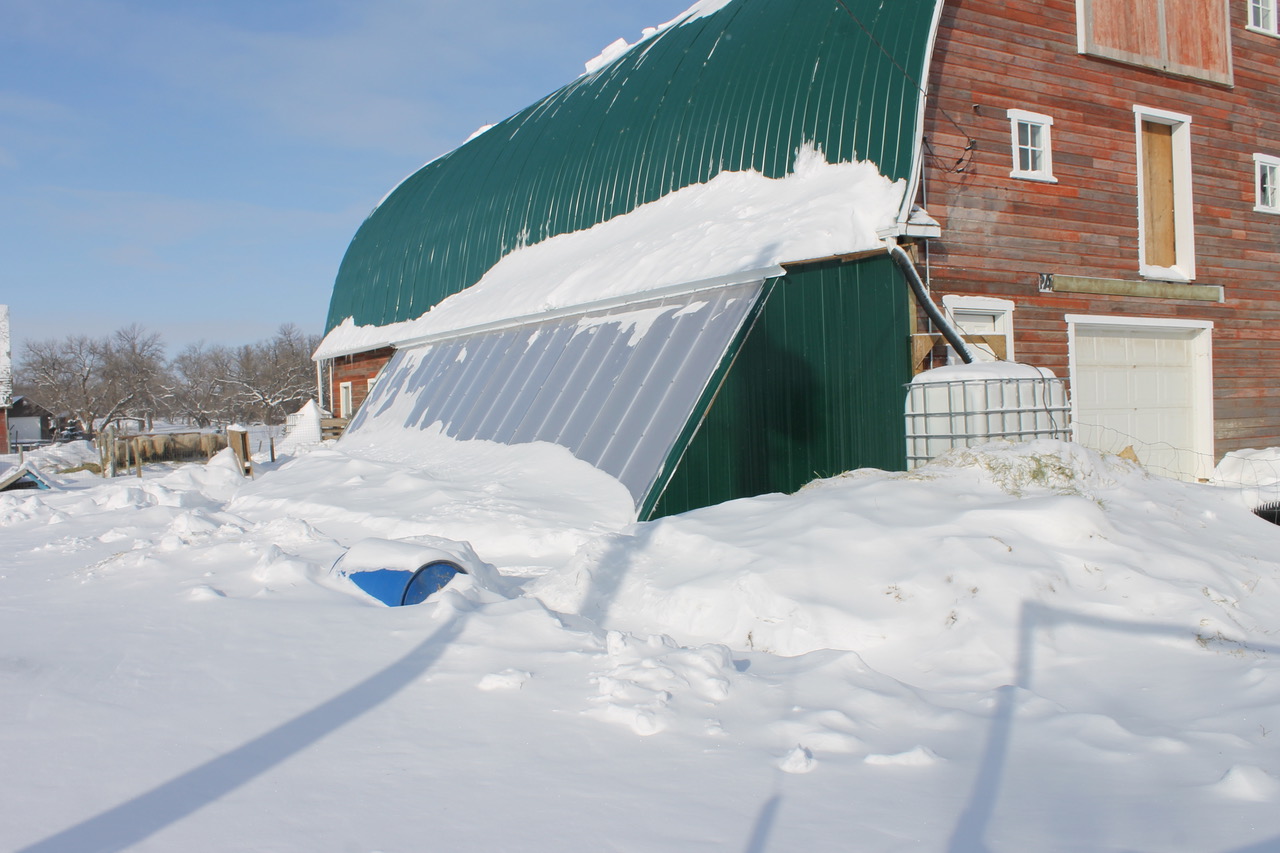 by Will Braun, Big Oak Farm

Our greenhouse hit 30 C on the coldest day of the winter with only the sun to heat it. We could top a 60-degree differential between inside and outside. Even at night, it never dipped below -3 C.

It felt like cheating the seasons and we joked about our tiny tropical getaway.

True story, but only half the story — the happy half.

Less often do we mention that it cost $14,000 for 350 square feet, not including labour. It was only financially justifiable if we factored in non-financial intangibles: quality of life, value of experimentation and all those other things we try to shoehorn into our mental balance sheets.

The other part of the story is that it burned down in February 2020, along with the barn it was attached to. A bitter loss.

Despite having done a ton of research for that greenhouse, I am back on YouTube, sifting through half-stories with a pile of sketches strewn next to the computer.

I’m a mediocre builder, but, like many small farmers, I love experimenting and I heed not the bounds of orthodoxy.

But how do you assess the sunny reports of the Zone 3 passive solar avocado farmers and the well-heeled newbies who start filming before their uber-greenhouse has seen a winter? How do you decide from among the many design approaches?

To be clear, I’m not talking about standard summer hoop houses — I don’t know much about those. I’m talking about structures designed to function through all or most of the winter with little or no electric or fossil-based heat source.

The sun is the ultimate energy source, but its delivery of energy is highly uneven from season to season and from day to night. At the winter solstice in southern Manitoba, the sun peaks at a meagre 17-degree angle above the southern horizon and only sticks around for eight hours. The point of a passive solar greenhouse is to even out that distribution, using heat from the summer in winter, and/or preserving daytime heat for when the sun makes its predictable daily departure.

Of course, in addition to heat, availability of light is another factor in the less sunny times.

Let me share some of my experience with our former greenhouse, and what we’re considering for the next one.

Before building our greenhouse, we talked to numerous greenhouse owners and visited various sites, including Blue Lagoon Organics, FortWhyte Farms, the University of Manitoba, Red River College, Wenkai Oriental Vegetables, a Deep Winter Greenhouse in Bemidji, Minn. and a sunken greenhouse we came across behind a service station somewhere in the Upper Peninsula of Michigan.

In the end we drew significantly on the Deep Winter Greenhouse design, for which the friendly folks at the University of Minnesota have posted detailed drawings online (including a cheaper 2.2 version). Their design relies on drawing air from the hottest part of the greenhouse during the day, passing it through an underground bed of fist-sized rocks and then turning the fans on again during the night to bring the warmth stored in the rocks back up into the growing area. This also provides flip side cooling benefits; other greenhouse designs pump the air deeper into the ground instead of a rock bed.

We adapted their design to eliminate the need for concrete and to attach the structure to our barn.

We combined those basic building design features with a growing style that Stefan Regnier at Blue Lagoon showed us, which essentially accommodates and facilitates the tendency of plants to grow toward the light, which comes largely from one side in this building design.

We also used hempcrete insulation with collaboration from Dr. Miroslava Kavgic, who was then at the University of Manitoba. Hempcrete is hemp chaff mixed in a concrete mixer with water, hydraulic lime (available and inexpensive), and hydrated lime or a metakaolin material (don’t even ask at the lumber yard). The mixture is tamped into light forms between studs.

Hempcrete is more comparable to blown-in cellulose insulation than concrete. The big selling points are that it is not a highly processed toxic material and that it is excellent at handling the passage of moisture without rotting or molding, which is critical in a high humidity environment like a greenhouse. Plus it’s reusable, relatively local and kind of sexy.

To complete that part of the story, hempcrete is a ton of work (including sourcing, mixing, tamping) compared to putting in mineral wool. And in our case it shrunk slightly when cured leaving gaps next to the studs in some places.

Though we were not able to have the greenhouse functional for a full season, indications were that we could have slowly grown certain greens throughout the winter and we could have had cucumbers and tomatoes a couple of months earlier than outdoors.

I am eager to build another greenhouse, but this one will be different.

No matter how well the solid walls of a greenhouse are insulated and sealed, and no matter how good your heat storage system is, a fundamental weakness of most designs is that you have a large glazing surface with next to no insulating value. So, for the roughly two-thirds of the day with no sunlight in winter, you experience significant heat loss. Therefore, the holy grail of passive solar greenhouse design is an effective way to cover the glazing surface during non-daylight hours.

One interesting example is the double-roof Chinese-style greenhouse. Dong Jianyi is building a second 30×300-ft greenhouse of this style near Olds, Alta. The greenhouse uses a blanket-style cover at night. The cover has an insulating value of about R3. Above that cover is a second layer of poly that keeps snow off the blanket; this is critical.

Dong Jianyi shipped in his building materials directly from northern China, where these greenhouses are widely used on a commercial scale.

The University of Manitoba has a prototype greenhouse with a fabric cover inside the main poly shell. As far as I can tell, this approach has not been adopted elsewhere.

I recently visited an overhead door installer to test the possibility of using an overhead door on the inside of the glazing surface of a greenhouse similar to the one we built previously. Compared to a blanket, this would greatly improve both the R-value (to R18) and the seal of the cover.

The downsides would be cost, a maximum door width of 24 feet (prices jump when you go wider), and the complications of hanging wires and lights above the growing area if a door needs to be able to open across most of the ceiling space during the day.

I’m hoping to get a used door and build a prototype.

If this were combined with a thermal storage system I might be able to enjoy local bananas at a cost slightly lower than flying to a Guatemalan U-pick each winter. Or, if I stack the north wall with used 20-litre metal pails of water for cheap thermal storage (Red River College has experimented with water as thermal storage), I could at least sell some winter greens, eat cucumbers in April and maybe even toss a bit of relevant experience into the hopper of the collective quest for the holy insulated grail.

And hopefully I’ll be able to resist posting anything on YouTube until I have a semi-useful story to tell.

My advice for other greenhouse dreamers is this: do lots of off-line research, trust your common sense, don’t overlook ventilation, factor in growing techniques, figure out what you can afford — then launch your experiment.

If you have questions or want to compare notes, feel free to contact me at [email protected].

The point of a passive solar greenhouse is to even out that distribution, using heat from the summer in winter, and/or preserving daytime heat for when the sun makes its predictable daily departure.