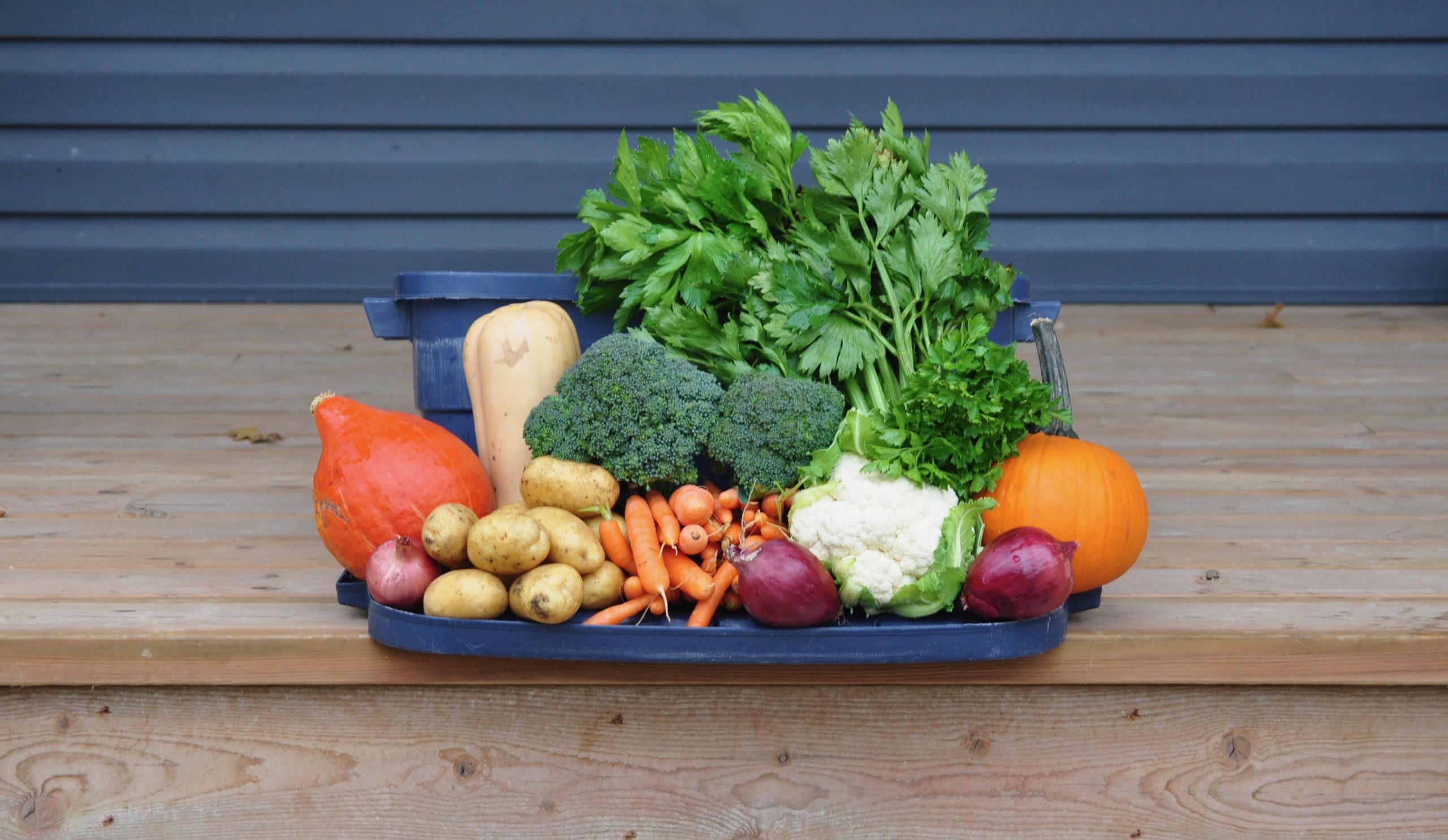 To assess the state of agriculture from where we stand today – deep in a global pandemic, with its disrupted supply chains, social networks and consumer patterns, all under the swirling skies of an increasingly volatile climate – it is only natural to wonder what the future holds for us as growers, ranchers, harvesters and producers that gather together under the banner of direct marketing.

“These are unprecedented times,” is a phrase that seems ubiquitous; we hear it on the news, in press conferences and in Zoom get-togethers. However, a conversation on the topic, with community members of any Indigenous or immigrant population in Manitoba would reveal that these are, in fact, not unprecedented times. Humans have endured both plague and catastrophic crisis in the recent and not-so-recent past, with some populations enduring much more, and more often, than others. Both society and agriculture have been shaped heavily by these crises, much as the events of today will shape society and agriculture going forward.

Though such a statement may have an ominous but hollow ring to it, it is worth noting that 100 years ago, the existence of an organization such as ours – with its focus on direct marketing – would have been met with puzzled looks. This is because locally grown and raised produce, small family farms and directly interacting with your customers (neighbours, friends and market-goers) was the norm, not a niche. It was the crisis of the Great Depression and the turbulent decades that followed that turned this arrangement on its head, changing both the physical landscape and how we navigate it.

Ironically, part of this shift, concurrent with the depressed economy, was startling agricultural “progress”: the proliferation of farm technology, displacing two- and four-footed labour intimately bound to a farm’s size and specificities through the direct relation between calories spent and potential calories harvested, with four-wheeled creatures instead fueled by abstract calories (the energy required to extract, refine, transport and burn said fuel).

This shift occurred in earnest in the 1930s in the United States, and in the 1940s on the Canadian prairies.[1]The role of synthetic fertilizers, herbicides and pesticides in the field, and preventative antibiotics (and later, hormones) in animals further displaced human labour[2]. At the same time, it heavily modified the landscape, further distancing our understanding of food production as a tangible concept of caloric exchange, and instead replacing it with more abstract, volatile and altogether ignorable concepts of fuel-calories and commodity exchange.

This reorganization and reform of agriculture along industrial lines in the 1930s, at the height of the Great Depression, was followed by the sharp decline of farms in the 1940s, steepening into the 1950s and still sliding today.

The irony of the situation is that such expensive “progress” was made in the face of the economic hardships of the Great Depression, which in our collective consciousness disproportionately affected farmers. However as is always the case, hardships were felt unevenly, and American aid programs under Roosevelt’s New Deal were tailored toward mechanization and conglomeration, typically favouring farms that had the means to scale up – or at least the determination not to be scaled out.

It was the small family farms and tenant farmers felt the deleterious effects of these policies, by design. Farmers that did not fit the mold of “progress,” held in contempt by policy-makers as “wayward human ‘strains,’ stubbornly thwarting progress with every new generation,”[3]were encouraged or forced to sell the farm (thus facilitating the further conglomeration of those farms that did fit the mold).

Though this is a quick gloss of a complicated and drawn out series of historical events, certainly with exceptions and stories of resistance, it highlights the initial decline of small farms in America, and accounts for half of the story of the collapse of direct market farming. There were simply fewer farms, and those that remained were generally larger, specialized and less appropriately scaled to direct sales. This trend has been on a steady trajectory since.

The other half of the collapse in direct farm marketing is more nuanced and less repeated in the written histories, and has to do with the publicity campaign surrounding Roosevelt’s New Deal, and assuaging an uneasy populace facing fear and insecurity surrounding the Great Depression. As Maren Stange, who has written on the social-reform publicity campaigns of the Great Depression, notes:

“Reform was no longer publicized with the hopeful idea that information about people might interpret, mediate, and manage class relations; rather, the goal of social publicity was the apparent elimination of class manifestations altogether and the portrayal of social and economic management as a matter of smooth, humane bureaucratic administration.”[4]

In effect, these campaigns aimed to ensure that the public would support policy, facilitating their intended positive effect on a depressed economy. In fact, it was deeper than this: communism was concurrently making major headway in Europe, and setting roots in the United States. In the eyes of the State, this growing movement had the potential to percolate quickly through the cracks of domestic crisis; community- and co-operation-based approaches sat dangerously close to the foreign and frightening concept of European communism.

The United States’ response was to redouble capitalism, pushing both producers and consumers away from community-based responses through their national publicity campaigns, and instead facilitating and encouraging alternative channels of production and exchange: sanctioned, supported and ultimately, mediated – cutting the “direct” out of farm marketing.[5]

On the one hand, the State was encouraging the conglomeration of farms, that could then be mobilized more efficiently to meet the needs of both city and country in the turmoil of the Great Depression. On the other hand, the general populace was being reassured by the State to place their trust in them, or rather, to not depend on community alliances for both political and economic reasons. The result was that what used to be an agricultural trade based on a hand shake and mutual trust between a consumer and farmer was renegotiated to have both the farmer and consumer reaching for a State-backed stream-lined commodity based approach, in which one should place their trust in their government, technology and the free market, rather than their neighbour.

Again, there are exceptions and hold-outs, probably many of whom we are descendants of. However, the general trajectory of farm-related commerce was away from direct marketing. Briefly punctuated by the Second World War, with its momentary slogans of self-sufficiency and co-operation, this mindset was even more deeply entrenched with the onset of McCarthyist fear-mongering in the 1950s and beyond.

In both the United States and Canada, the number of working farms was halved between the 1930s and the 1970s,[6]while the concurrent rise of pre-packaged foods and the kitchen technologies that supported them is well-known and well-documented.

With the onset of the Vietnam War and the hippie counterculture that emerged alongside it, one can begin to trace a resurgence of small agriculture, or more precisely, the formation of strategic alliances amongst farmers and consumers outside of those prescribed by State and market.

Organic farming, although already present in an unofficial and unorganized capacity, gained momentum as both a principled growing practice and political counterpoint to a dominant model of maximum extraction and cutthroat marketing. Coincident with the emergence of organized organics, came the resurgence of farmers’ markets and, thus, the “rebirth” of direct farm marketing, even if only as a niche in the larger scope of agriculture.

However, farmers know better than anyone that this was not a happily-ever-after moment. In spite of the re-appearance of farmers’ markets, the growing movement toward organic standards, an increase in co-operatives and farm workers’ unions and the small influx of new farmers, capitalist driven growth-based agriculture did not miss a step. Though the blip of the 1960s and 1970s showed that small farm agriculture still had a heartbeat, the systemic challenges that took hold in the 1930s and 1940s have continued to grow, and the steady decline of small farms has not abated.

When we talk about resilience, the theme of this year’s Direct Farm Manitoba conference, we have to acknowledge that the survival of direct farm marketing itself is one of the great hallmarks of resilience in agriculture today, weathering targeted policies that eroded the relationship between farmer and consumer from both ends. Policies that were originally well-meaning and implemented in a time of crisis, but that ultimately favoured corporation over community, competition over co-operation, and efficiency over equity; policies that have had a lasting impact on the environment, on society and on agriculture as both an industry and a way of living.

As we face the great crisis of our lifetime, it’s hard to say where direct farm marketing will land. It’s heartening to see the creative and co-operative ways that both farmers and consumers have found to support each other over the past year, and it’s promising to see that the conversation continues towards more sustainable and equitable solutions that may carry beyond the pandemic.

Alas, if the history of agriculture over the last 100 years shows us anything, it’s that the hits will keep coming. But if taking the hits and standing back up is the definition of resilience, at least we’ve got that on our side.

[1]Lew & Cater. “Farm Mechanization on the Otherwise ‘Featureless’ Plain: tractors on the Northern Great Plains and Immigration Policy of the 1920s.” CliometricaVol. 12, Issue 2, 2018

[5]Canadian fear of communism did not grow quite at the same rate as in the US, but we eventually caught up, as did our agricultural policies.

…locally grown and raised produce, small family farms and directly interacting with your customers (neighbours, friends and market-goers) was the norm, not a niche